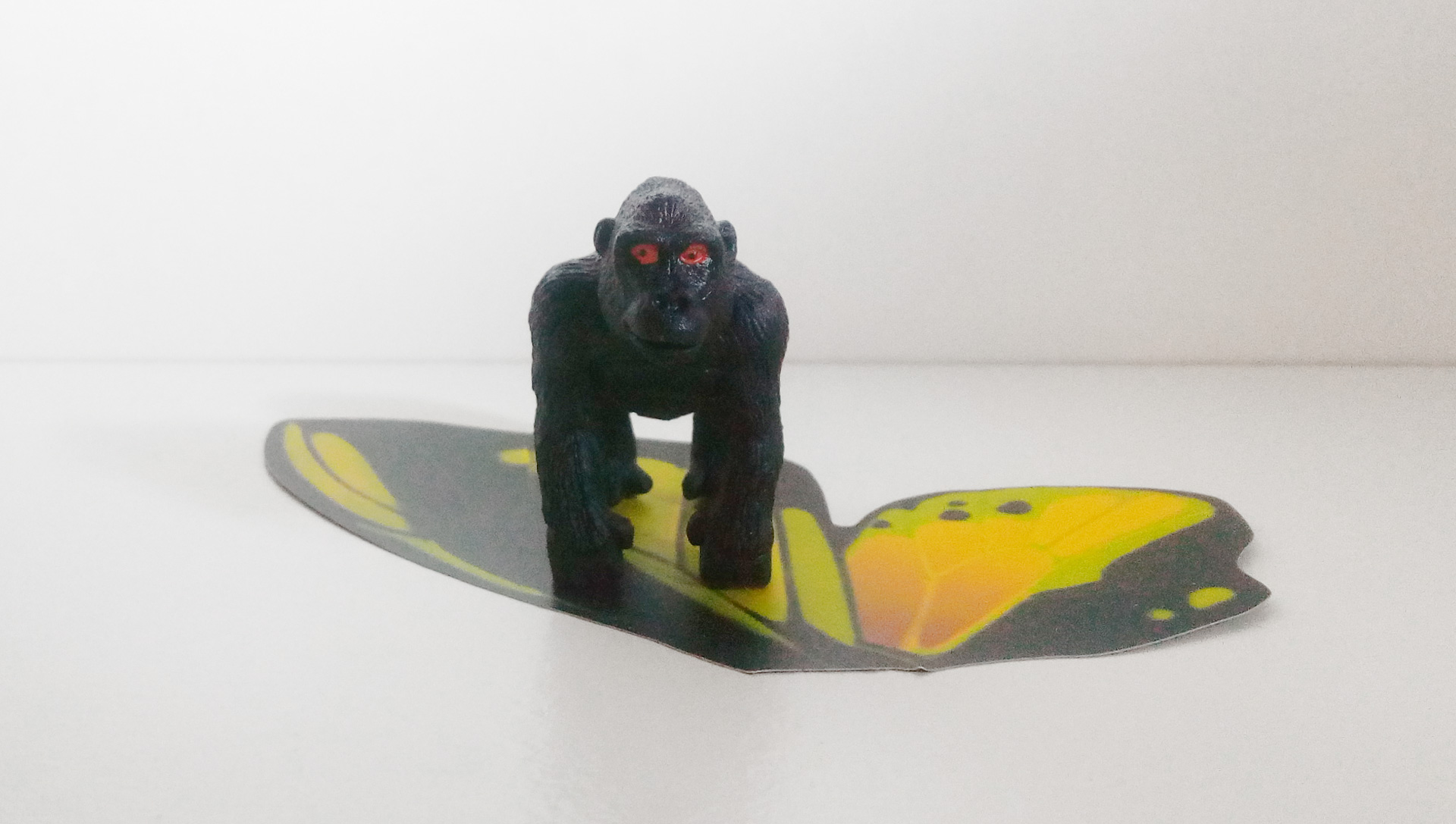 The gorilla on the wing of the butterfly

Gorillas are ground-dwelling, predominantly herbivorous apes that inhabit the forests of central Sub-Saharan Africa. The genus Gorillais divided into two species: the eastern gorillas and the western gorillas (both critically endangered), and either four or five subspecies. They are the largest living primates. The DNA of gorillas is highly similar to that of humans, from 95–99% depending on what is counted, and they are the next closest living relatives to humans after the chimpanzees and bonobos.
Gorillas' natural habitats cover tropical or subtropical forests in Sub-Saharan Africa. Although their range covers a small percentage of Sub-Saharan Africa, gorillas cover a wide range of elevations. The mountain gorilla inhabits the Albertine Rift montane cloud forests of the Virunga Volcanoes, ranging in altitude from 2,200–4,300 metres (7,200–14,100 ft). Lowland gorillas live in dense forests and lowland swamps and marshes as low as sea level, with western lowland gorillas living in Central West African countries and eastern lowland gorillas living in the Democratic Republic of the Congo near its border with Rwanda.

A wing is a type of fin that produces lift, while moving through air or some other fluid. As such, wings have streamlined cross-sectionsthat are subject to aerodynamic forces and act as an airfoils. A wing's aerodynamic efficiency is expressed as its lift-to-drag ratio. The lift a wing generates at a given speed and angle of attack can be one to two orders of magnitude greater than the total drag on the wing. A high lift-to-drag ratio requires a significantly smaller thrust to propel the wings through the air at sufficient lift.
Lifting structures used in water, include various foils, including hydrofoils. Hydrodynamics is the governing science, rather than aerodynamics. Applications of underwater foils occur in hydroplanes, sailboats and submarines.

Butterflies are insects in the macrolepidopteran clade Rhopalocera from the order Lepidoptera, which also includes moths. Adult butterflies have large, often brightly coloured wings, and conspicuous, fluttering flight. The group comprises the large superfamilyPapilionoidea, which contains at least one former group, the skippers (formerly the superfamily "Hesperioidea") and the most recent analyses suggest it also contains the moth-butterflies (formerly the superfamily "Hedyloidea"). Butterfly fossils date to the Paleocene, which was about 56 million years ago.
Butterflies have the typical four-stage insect life cycle. Winged adults lay eggs on the food plant on which their larvae, known as caterpillars, will feed. The caterpillars grow, sometimes very rapidly, and when fully developed, pupate in a chrysalis. When metamorphosis is complete, the pupal skin splits, the adult insect climbs out, and after its wings have expanded and dried, it flies off. Some butterflies, especially in the tropics, have several generations in a year, while others have a single generation, and a few in cold locations may take several years to pass through their entire life cycle.
Butterflies are often polymorphic, and many species make use of camouflage, mimicry and aposematism to evade their predators. Some, like the monarch and the painted lady, migrate over long distances. Many butterflies are attacked by parasites or parasitoids, including wasps, protozoans, flies, and other invertebrates, or are preyed upon by other organisms. Some species are pests because in their larval stages they can damage domestic crops or trees; other species are agents of pollination of some plants. Larvae of a few butterflies (e.g., harvesters) eat harmful insects, and a few are predators of ants, while others live as mutualists in association with ants. Culturally, butterflies are a popular motif in the visual and literary arts.