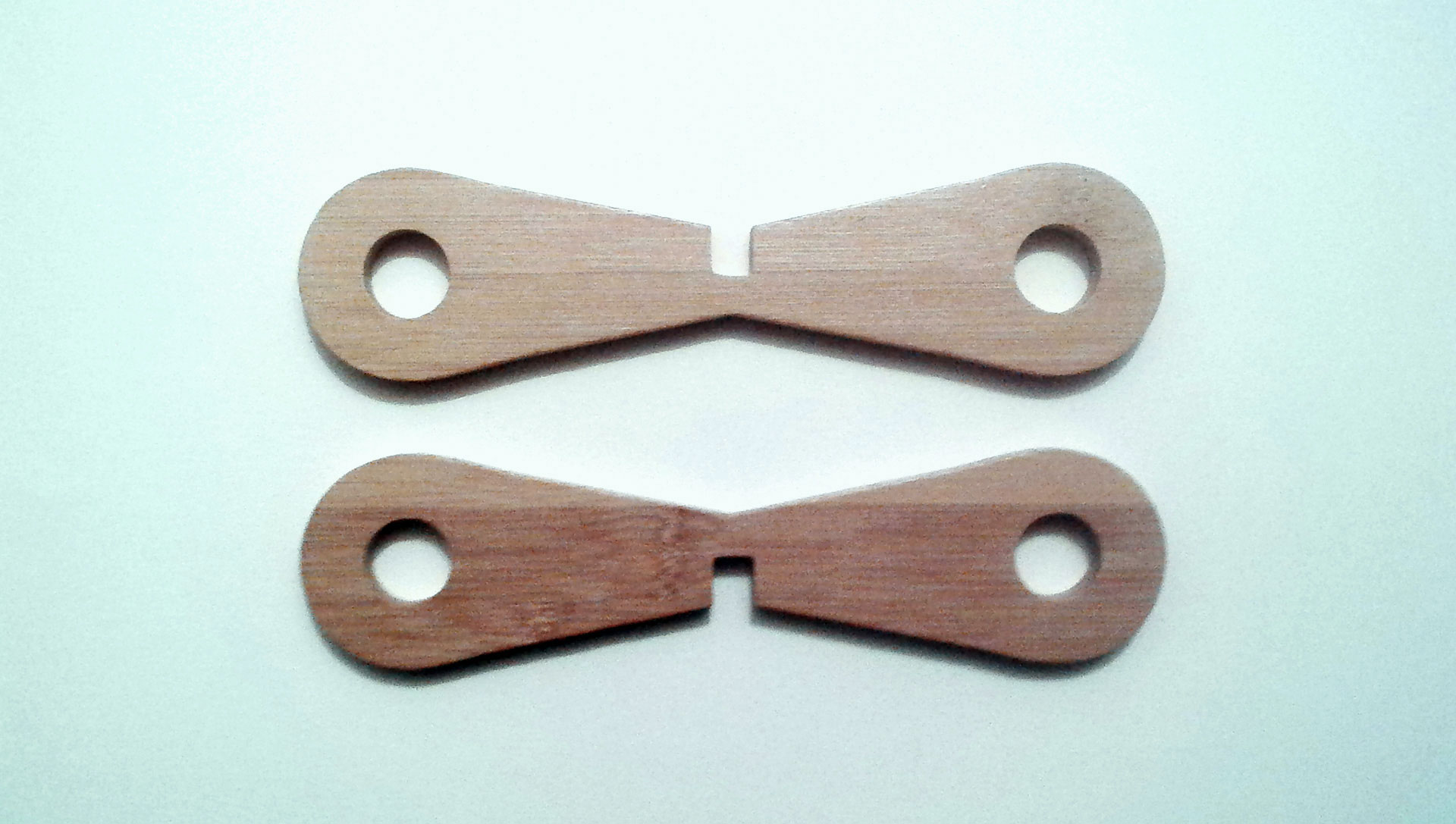 2 wooden parts with the holes

Wood is a porous and fibrous structural tissue found in the stems and roots of trees and other woody plants. It is an organic material - a natural composite of cellulose fibers that are strong in tension and embedded in a matrix of lignin that resists compression. Wood is sometimes defined as only the secondary xylem in the stems of trees, or it is defined more broadly to include the same type of tissue elsewhere such as in the roots of trees or shrubs.[citation needed] In a living tree it performs a support function, enabling woody plants to grow large or to stand up by themselves. It also conveys water and nutrients between the leaves, other growing tissues, and the roots. Wood may also refer to other plant materials with comparable properties, and to material engineered from wood, or wood chips or fiber.
Wood has been used for thousands of years for fuel, as a construction material, for making tools and weapons, furniture and paper. More recently it emerged as a feedstock for the production of purified cellulose and its derivatives, such as cellophane and cellulose acetate.
As of 2005, the growing stock of forests worldwide was about 434 billion cubic meters, 47% of which was commercial. As an abundant, carbon-neutral renewable resource, woody materials have been of intense interest as a source of renewable energy. In 1991 approximately 3.5 billion cubic meters of wood were harvested. Dominant uses were for furniture and building construction.

In philosophy and mathematical logic, mereology (from the Greek μέρος meros (root: μερε- mere-, "part") and the suffix -logy "study, discussion, science") is the study of parts and the wholes they form. Whereas set theory is founded on the membership relation between a set and its elements, mereology emphasizes the meronomic relation between entities, which—from a set-theoretic perspective—is closer to the concept of inclusion between sets.
Mereology has been explored in various ways as applications of predicate logic to formal ontology, in each of which mereology is an important part. Each of these fields provides its own axiomatic definition of mereology. A common element of such axiomatizations is the assumption, shared with inclusion, that the part-whole relation orders its universe, meaning that everything is a part of itself (reflexivity), that a part of a part of a whole is itself a part of that whole (transitivity), and that two distinct entities cannot each be a part of the other (antisymmetry), thus forming a poset. A variant of this axiomatization denies that anything is ever part of itself (irreflexivity) while accepting transitivity, from which antisymmetry follows automatically.
Although mereology is an application of mathematical logic, what could be argued to be a sort of "proto-geometry", it has been wholly developed by logicians, ontologists, linguists, engineers, and computer scientists, especially those working in artificial intelligence. In particular, mereology is also on the basis for a point-free foundation of geometry (see for example the quoted pioneering paper of Alfred Tarski and the review paper by Gerla 1995).
"Mereology" can also refer to formal work in general systems theory on system decomposition and parts, wholes and boundaries (by, e.g., Mihajlo D. Mesarovic (1970), Gabriel Kron (1963), or Maurice Jessel (see Bowden (1989, 1998)). A hierarchical version of Gabriel Kron's Network Tearing was published by Keith Bowden (1991), reflecting David Lewis's ideas on gunk. Such ideas appear in theoretical computer science and physics, often in combination with sheaf theory, topos, or category theory. See also the work of Steve Vickers on (parts of) specifications in computer science, Joseph Goguen on physical systems, and Tom Etter (1996, 1998) on link theory and quantum mechanics.

A hole is an opening, usually circular, in or through a particular medium, usually a solid body. Holes occur through natural and artificial processes, and may be useful for various purposes, or may represent a problem needing to be addressed in many fields of engineering. Depending on the material and the placement, a hole may be an indentation in a surface (such as a hole in the ground), or may pass completely through that surface (such as a hole created by a hole puncher in a piece of paper). In engineering, a hole may be blind or through if it is partial or complete depth.