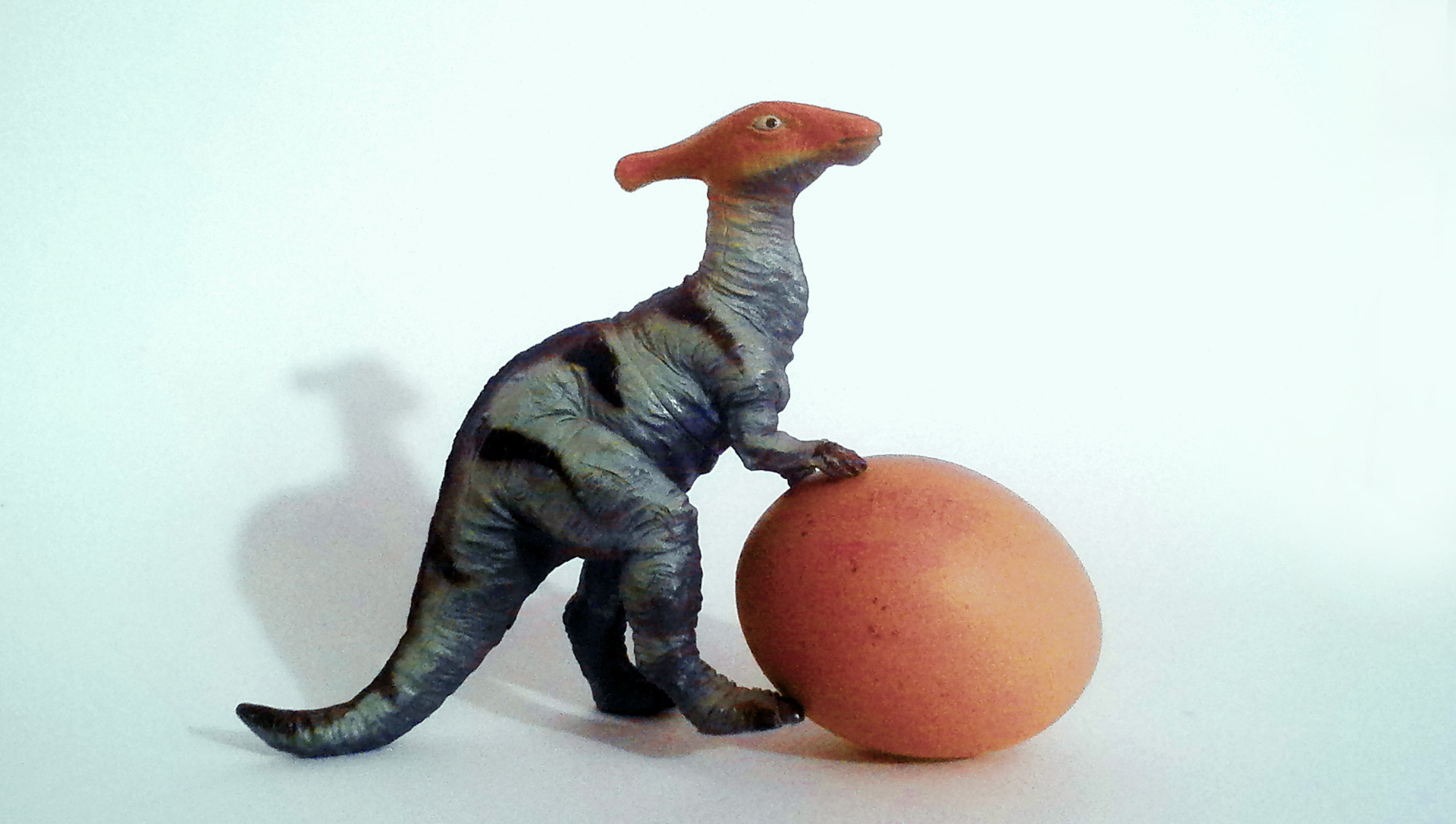 parasaurolophus with the boiled egg

Parasaurolophus (/ˌpærəsɔːˈrɒləfəs, -ˌsɔːrəˈloʊfəs/; meaning "near crested lizard" in reference to Saurolophus) is a genus of herbivorous ornithopod dinosaur that lived in what is now North America and possibly Asia during the Late Cretaceous Period, about 76.5–73 million years ago. It was a herbivore that walked both as a biped and as a quadruped. Three species are universally recognized: P. walkeri (the type species), P. tubicen, and the short-crested P. cyrtocristatus. Additionally, a fourth species, P. jiayensis, has been proposed, although it is more commonly placed in the separate genus Charonosaurus. Remains are known from Alberta (Canada), New Mexico and Utah (United States), and possibly Heilongjiang, (China). The genus was first described in 1922 by William Parks from a skull and partial skeleton found in Alberta.
Parasaurolophus was a hadrosaurid, part of a diverse family of Cretaceous dinosaurs known for their range of bizarre head adornments. This genus is known for its large, elaborate cranial crest, which at its largest forms a long curved tube projecting upwards and back from the skull. Charonosaurus from China, which may have been its closest relative, had a similar skull and potentially a similar crest. Visual recognition of both species and sex, acoustic resonance, and thermoregulation have been proposed as functional explanations for the crest. It is one of the rarer hadrosaurids, known from only a handful of good specimens.

Boiling is the rapid vaporization of a liquid, which occurs when a liquid is heated to its boiling point, the temperature at which the vapour pressure of the liquid is equal to the pressure exerted on the liquid by the surrounding atmosphere. There are two main types of boiling: nucleate boiling where small bubbles of vapour form at discrete points, and critical heat flux boiling where the boiling surface is heated above a certain critical temperature and a film of vapor forms on the surface. Transition boiling is an intermediate, unstable form of boiling with elements of both types. The boiling point of water is 100 °C or 212 °F but is lower with the decreased atmospheric pressure found at higher altitudes.
Boiling water is used as a method of making it potable by killing microbes that may be present. The sensitivity of different micro-organisms to heat varies, but if water is held at 70 °C (158 °F) for ten minutes, many organisms are killed, but some are more resistant to heat and require one minute at the boiling point of water.
Boiling is also used in cooking. Foods suitable for boiling include vegetables, starchy foods such as rice, noodles and potatoes, eggs, meats, sauces, stocks, and soups. As a cooking method, it is simple and suitable for large-scale cookery. Tough meats or poultry can be given a long, slow cooking and a nutritious stock is produced. Disadvantages include loss of water-soluble vitamins and minerals. Commercially prepared foodstuffs are sometimes packed in polythene sachets and sold as "boil-in-the-bag" products.

The egg is the organic vessel containing the zygote in which an embryo develops until it can survive on its own, at which point the animal hatches. An egg results from fertilization of an egg cell. Most arthropods, vertebrates (excluding mammals), and mollusks lay eggs, although some, such as scorpions, do not.
Reptile eggs, bird eggs, and monotreme eggs are laid out of water and are surrounded by a protective shell, either flexible or inflexible. Eggs laid on land or in nests are usually kept within a warm and favorable temperature range while the embryo grows. When the embryo is adequately developed it hatches, i.e., breaks out of the egg's shell. Some embryos have a temporary egg tooth they use to crack, pip, or break the eggshell or covering.
The largest recorded egg is from a whale shark and was 30 cm × 14 cm × 9 cm (11.8 in × 5.5 in × 3.5 in) in size.[1] Whale shark eggs typically hatch within the mother. At 1.5 kg (3.3 lb) and up to 17.8 cm × 14 cm (7.0 in × 5.5 in), the ostrich egg is the largest egg of any living bird,[2] though the extinct elephant bird and some dinosaurs laid larger eggs. The bee hummingbird produces the smallest known bird egg, which weighs half of a gram (around 0.02 oz). Some eggs laid by reptiles and most fish, amphibians, insects, and other invertebrates can be even smaller.
Reproductive structures similar to the egg in other kingdoms are termed "spores," or in spermatophytes "seeds," or in gametophytes "egg cells".