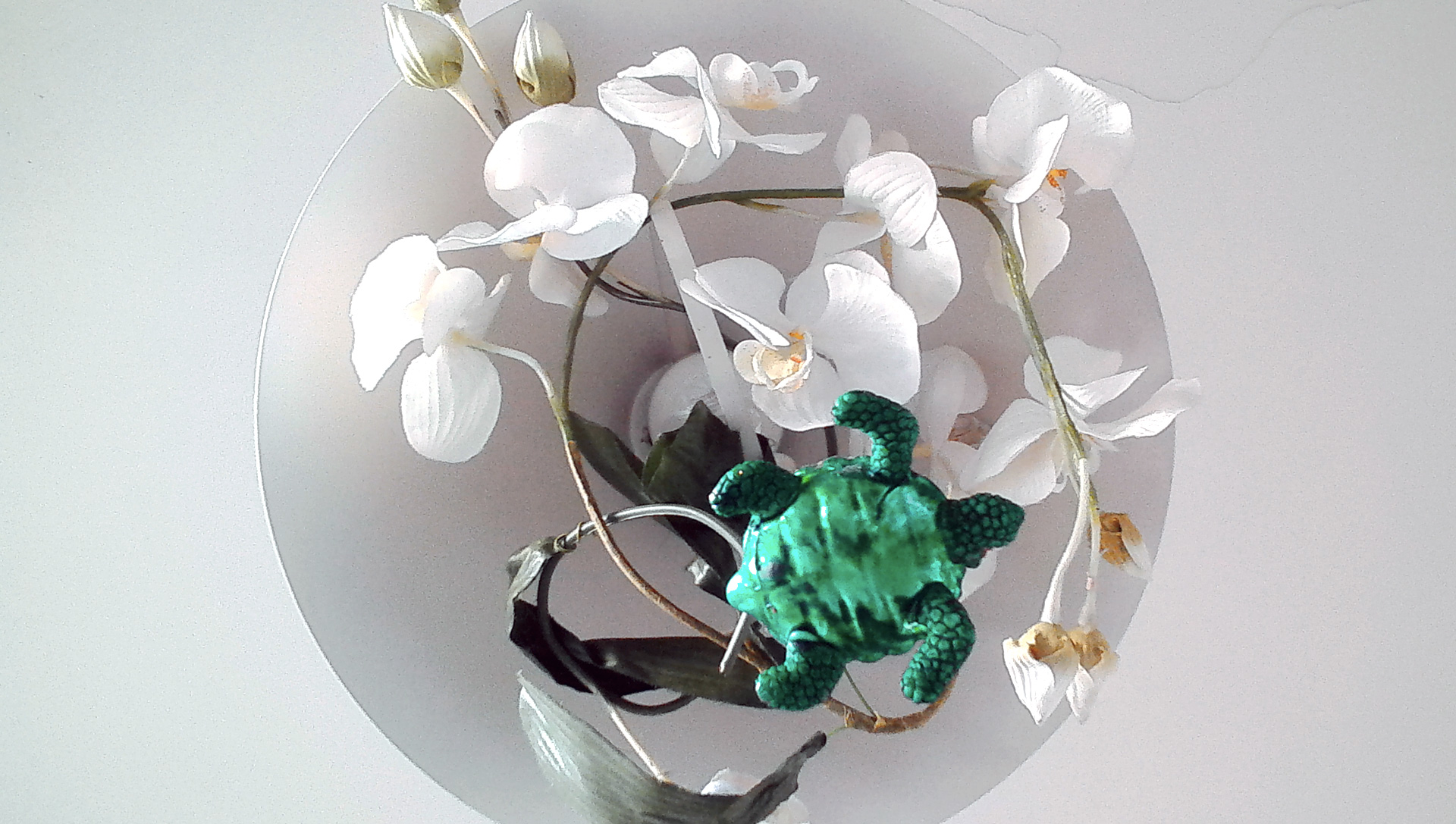 the glass turtle, the plastic orchids and the white chandelier

Glass is a non-crystalline, amorphous solid that is often transparent and has widespread practical, technological, and decorative usage in, for example, window panes, tableware, and optoelectronics. The most familiar, and historically the oldest, types of glass are "silicate glasses" based on the chemical compound silica (silicon dioxide, or quartz), the primary constituent of sand. The term glass, in popular usage, is often used to refer only to this type of material, which is familiar from use as window glass and in glass bottles. Of the many silica-based glasses that exist, ordinary glazing and container glass is formed from a specific type called soda-lime glass, composed of approximately 75% silicon dioxide (SiO2), sodium oxide (Na2O) from sodium carbonate (Na2CO3), calcium oxide (CaO), also called lime, and several minor additives.
Many applications of silicate glasses derive from their optical transparency, giving rise to their primary use as window panes. Glass will transmit, reflect and refract light; these qualities can be enhanced by cutting and polishing to make optical lenses, prisms, fine glassware, and optical fibers for high speed data transmission by light. Glass can be coloured by adding metallic salts, and can also be painted and printed with vitreous enamels. These qualities have led to the extensive use of glass in the manufacture of art objects and in particular, stained glass windows. Although brittle, silicate glass is extremely durable, and many examples of glass fragments exist from early glass-making cultures. Because glass can be formed or moulded into any shape, it has been traditionally used for vessels: bowls, vases, bottles, jars and drinking glasses. In its most solid forms it has also been used for paperweights, marbles, and beads. When extruded as glass fiber and matted as glass wool in a way to trap air, it becomes a thermal insulating material, and when these glass fibers are embedded into an organic polymer plastic, they are a key structural reinforcement part of the composite material fiberglass. Some objects historically were so commonly made of silicate glass that they are simply called by the name of the material, such as drinking glasses and eyeglasses.
Scientifically, the term "glass" is often defined in a broader sense, encompassing every solid that possesses a non-crystalline (that is, amorphous) structure at the atomic scale and that exhibits a glass transition when heated towards the liquid state. Porcelains and many polymer thermoplastics familiar from everyday use are glasses. These sorts of glasses can be made of quite different kinds of materials than silica: metallic alloys, ionic melts, aqueous solutions, molecular liquids, and polymers. For many applications, like glass bottles or eyewear, polymer glasses (acrylic glass, polycarbonate or polyethylene terephthalate) are a lighter alternative than traditional glass.

Turtles are diapsids of the order Testudines (or Chelonii) characterized by a special bony or cartilaginous shell developed from their ribs and acting as a shield. "Turtle" may refer to the order as a whole (American English) or to fresh-water and sea-dwelling testudines (British English). The order Testudines includes both extant (living) and extinct species. The earliest known members of this group date from 220 million years ago, making turtles one of the oldest reptile groups and a more ancient group than snakes or crocodilians. Of the 356 known species alive today, some are highly endangered.
Turtles are ectotherms—animals commonly called cold-blooded—meaning that their internal temperature varies according to the ambient environment. However, because of their high metabolic rate, leatherback sea turtles have a body temperature that is noticeably higher than that of the surrounding water. Turtles are classified as amniotes, along with other reptiles, birds, and mammals. Like other amniotes, turtles breathe air and do not lay eggs underwater, although many species live in or around water. The study of turtles is called cheloniology, after the Greek word for turtle. It is also sometimes called testudinology, after the Latin name for turtles.

Plastic is material consisting of any of a wide range of synthetic or semi-synthetic organic compounds that are malleableand so can be molded into solid objects.
Plasticity is the general property of all materials which can deform irreversibly without breaking but, in the class of moldable polymers, this occurs to such a degree that their actual name derives from this specific ability.
Plastics are typically organic polymers of high molecular mass and often contain other substances. They are usually synthetic, most commonly derived from petrochemicals, however, an array of variants are made from renewable materials such as polylactic acid from corn or cellulosics from cotton linters.
Due to their low cost, ease of manufacture, versatility, and imperviousness to water, plastics are used in a multitude of products of different scale, including paper clips and spacecraft. They have prevailed over traditional materials, such as wood, stone, horn and bone, leather, metal, glass, and ceramic, in some products previously left to natural materials.
In developed economies, about a third of plastic is used in packaging and roughly the same in buildings in applications such as piping, plumbing or vinyl siding.[3]Other uses include automobiles (up to 20% plastic), furniture, and toys. In the developing world, the applications of plastic may differ — 42% of India's consumption is used in packaging.
Plastics have many uses in the medical field as well, with the introduction of polymer implants and other medical devices derived at least partially from plastic. The field of plastic surgery is not named for use of plastic materials, but rather the meaning of the word plasticity, with regard to the reshaping of flesh.
The world's first fully synthetic plastic was bakelite, invented in New York in 1907 by Leo Baekeland who coined the term 'plastics'. Many chemists have contributed to the materials science of plastics, including Nobel laureate Hermann Staudingerwho has been called "the father of polymer chemistry" and Herman Mark, known as "the father of polymer physics".
The success and dominance of plastics starting in the early 20th century led to environmental concerns regarding its slow decomposition rate after being discarded as trash due to its composition of large molecules. Toward the end of the century, one approach to this problem was met with wide efforts toward recycling.

Orchideae is a tribe of orchids in the subfamily Orchidoideae. It is the largest tribe, containing more than 1,700 species.  It has been divided into two subtribes, Orchidinae and Habenariinae. However, although phylogenetic studies have established the monophyly of the subtribes, the generic boundaries are unclear, with many genera as traditionally circumscribed being paraphyletic or even polyphyletic. Species of genera such as Habenaria and Platanthera are placed into both subtribes, so a clear assignment of all genera to subtribes is not possible as of March 2018.
The Asian species of Orchideae, in particular, have been subject to repeated changes of generic placement from 2012 onwards.

White is the lightest color and is achromatic (having no hue). It is the color of fresh snow, chalk, and milk, and is the opposite of black. White objects fully reflect and scatter all the visible wavelengths of light. White on television and computer screens is created by a mixture of red, blue and green light.
In ancient Egypt and ancient Rome, priestesses wore white as a symbol of purity, and Romans wore a white toga as a symbol of citizenship. In the Middle Ages and Renaissance a white unicorn symbolized chastity, and a white lamb sacrifice and purity. It was the royal color of the Kings of France, and of the monarchist movement that opposed the Bolsheviks during the Russian Civil War(1917–1922). Greek and Roman temples were faced with white marble, and beginning in the 18th century, with the advent of neoclassical architecture, white became the most common color of new churches, capitols and other government buildings, especially in the United States. It was also widely used in 20th century modern architecture as a symbol of modernity and simplicity.
According to surveys in Europe and the United States, white is the color most often associated with perfection, the good, honesty, cleanliness, the beginning, the new, neutrality, and exactitude. White is an important color for almost all world religions. The Pope, the head of the Roman Catholic Church, has worn white since 1566, as a symbol of purity and sacrifice. In Islam, and in the Shinto religion of Japan, it is worn by pilgrims. In Western cultures and in Japan, white is the most common color for wedding dresses, symbolizing purity and virginity. In many Asian cultures, white is also the color of mourning.

A chandelier (/ˌʃændəˈlɪər/; also known as girandole, candelabra lamp, or least commonly suspended lights) is a branched ornamental light fixture designed to be mounted on ceilings or walls. Chandeliers are often ornate, and normally use incandescent light bulbs, though some modern designs also use fluorescent lamps and recently LEDs.
Classic chandeliers have arrays of hanging crystal prisms to illuminate a room with refracted light, while contemporary chandeliers assume a more minimalist design that does not contain prisms and illuminate a room with direct light from the lamps, sometimes also equipped with translucent glass covering each lamp. Modern chandeliers have a more modernized design that uses LEDs, and combines the elements of both classic and contemporary designs; some also equipped with refractive crystal prisms or small mirrors.
Chandeliers are distinct from pendant lights, as they usually consist of multiple lamps and hang in branched frames, whereas pendant lights hang from a single cord and only contain one or two lamps with fewer decorative elements. Due to their size, they are often installed in hallways, living rooms, staircases, lounges, and dining rooms. However, miniature chandeliers also exist, allowing them to be installed in smaller spaces such as bedrooms or small living spaces.
Chandeliers evolved from candelabra and were invented during the medieval era. They originally used candles as their source of light and remained in use until the 18th century, when gas lights, later superseded by electric lights, were invented.