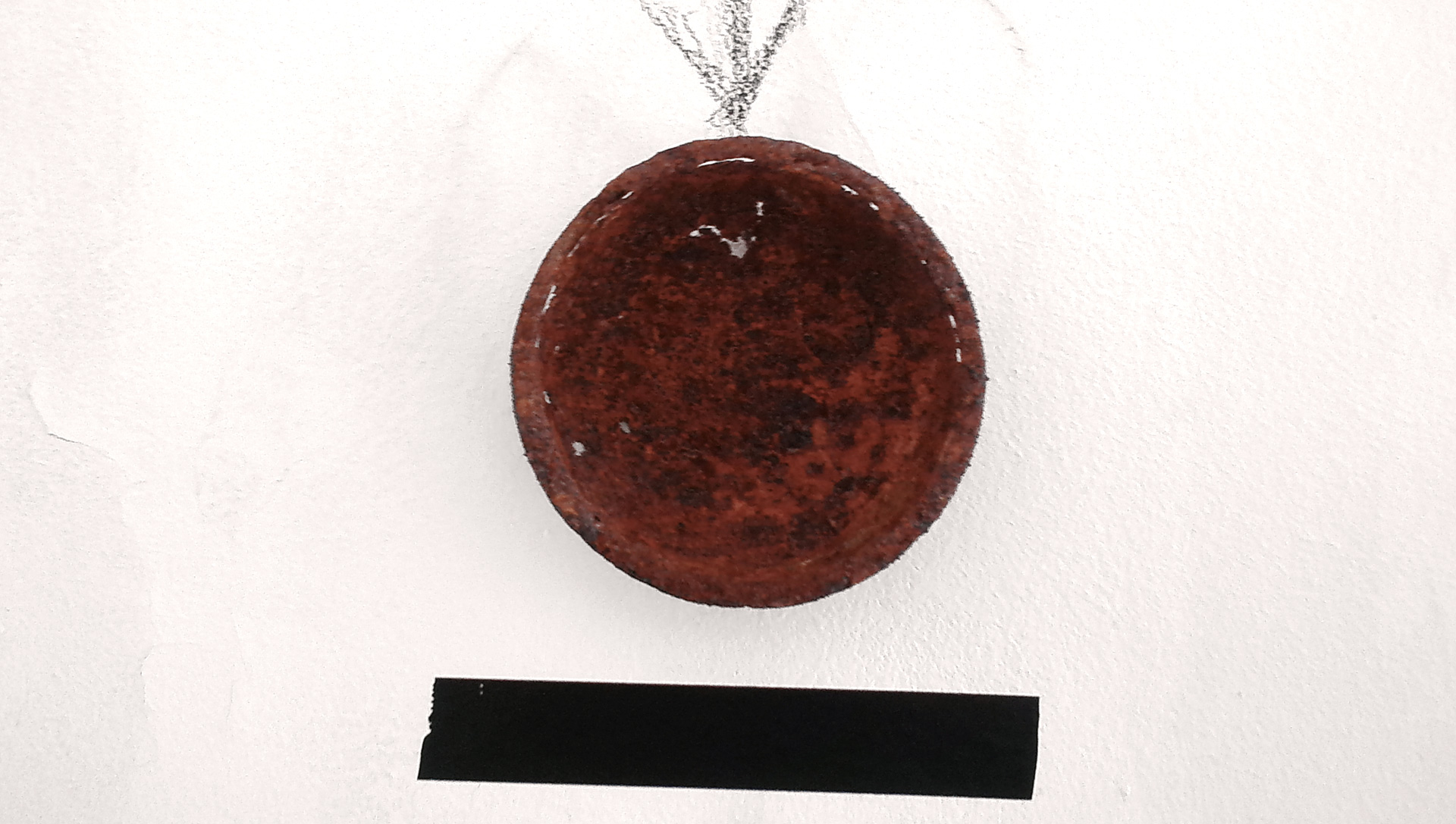 the rusty pastry shape and the black adhesive tape

Rust is an iron oxide, a usually red oxide formed by the redox reaction of iron and oxygen in the presence of water or air moisture. Several forms of rust are distinguishable both visually and by spectroscopy, and form under different circumstances. Rust consists of hydrated iron oxides Fe2O3·nH2O and iron oxide-hydroxide (FeO(OH), Fe(OH)3).
Given sufficient time, oxygen, and water, any iron mass will eventually convert entirely to rust and disintegrate. Surface rust is flaky and friable, and it provides no protection to the underlying iron, unlike the formation of patina on copper surfaces. Rusting is the common term for corrosion of iron and its alloys, such as steel. Many other metals undergo similar corrosion, but the resulting oxides are not commonly called rust.
Other forms of rust exist, like the result of reactions between iron and chloride in an environment deprived of oxygen. Rebarused in underwater concrete pillars, which generates green rust, is an example. Although rusting is generally a negative aspect of iron, a particular form of rusting, known as "stable rust," causes the object to have a thin coating of rust over the top, and if kept in low relative humidity, makes the "stable" layer protective to the iron below, but not to the extent of other oxides, such as aluminum.

Pastry is a dough of flour, water and shortening (solid fats, including butter) that may be savoury or sweetened. Sweetened pastries are often described as bakers' confectionery. The word "pastries" suggests many kinds of baked products made from ingredients such as flour, sugar, milk, butter, shortening, baking powder, and eggs. Small tarts and other sweet baked products are called pastries. Common pastry dishes include pies, tarts, quiches and pasties.
The French word pâtisserie is also used in English (with or without the accent) for the same foods. Originally, the French word pastisserie referred to anything, such as a meat pie, made in dough (paste, later pâte) and not typically a luxurious or sweet product.. This meaning still persisted in the nineteenth century, though by then the term more often referred to the sweet and often ornate confections implied today.
Pastry can also refer to the pastry dough, from which such baked products are made. Pastry dough is rolled out thinly and used as a base for baked products.
Pastry is differentiated from bread by having a higher fat content, which contributes to a flaky or crumbly texture. A good pastry is light and airy and fatty, but firm enough to support the weight of the filling. When making a shortcrust pastry, care must be taken to blend the fat and flour thoroughly before adding any liquid. This ensures that the flour granules are adequately coated with fat and less likely to develop gluten. On the other hand, overmixing results in long gluten strands that toughen the pastry. In other types of pastry such as Danish pastry and croissants, the characteristic flaky texture is achieved by repeatedly rolling out a dough similar to that for yeastbread, spreading it with butter, and folding it to produce many thin layers.

A shape is the form of an object or its external boundary, outline, or external surface, as opposed to other properties such as color, texture or material composition.

Black is the darkest color, the result of the absence or complete absorption of visible light. It is an achromatic color, literally a color without hue, like white and gray. It is often used symbolically or figuratively to represent darkness, while white represents light.
Black ink is the most common color used for printing books, newspapers and documents, because it has the highest contrast with white paper and is the easiest to read. For the same reason, black text on a white screen is the most common format used on computer screens. In color printing it is used along with the subtractive primaries cyan, yellow, and magenta, in order to help produce the darkest colors.
Black and white have often been used to describe opposites; particularly truth and ignorance, good and evil, the Dark Ages versus Age of Enlightenment. Since the Middle Ages, black has been the symbolic color of solemnity and authority, and for this reason is still commonly worn by judges and magistrates.
Black was one of the first colors used by artists in neolithic cave paintings. In the 14th century, it began to be worn by royalty, the clergy, judges and government officials in much of Europe. It became the color worn by English romantic poets, businessmen and statesmen in the 19th century, and a high fashion color in the 20th century.
In the Roman Empire, it became the color of mourning, and over the centuries it was frequently associated with death, evil, witches and magic. According to surveys in Europe and North America, it is the color most commonly associated with mourning, the end, secrets, magic, force, violence, evil, and elegance.