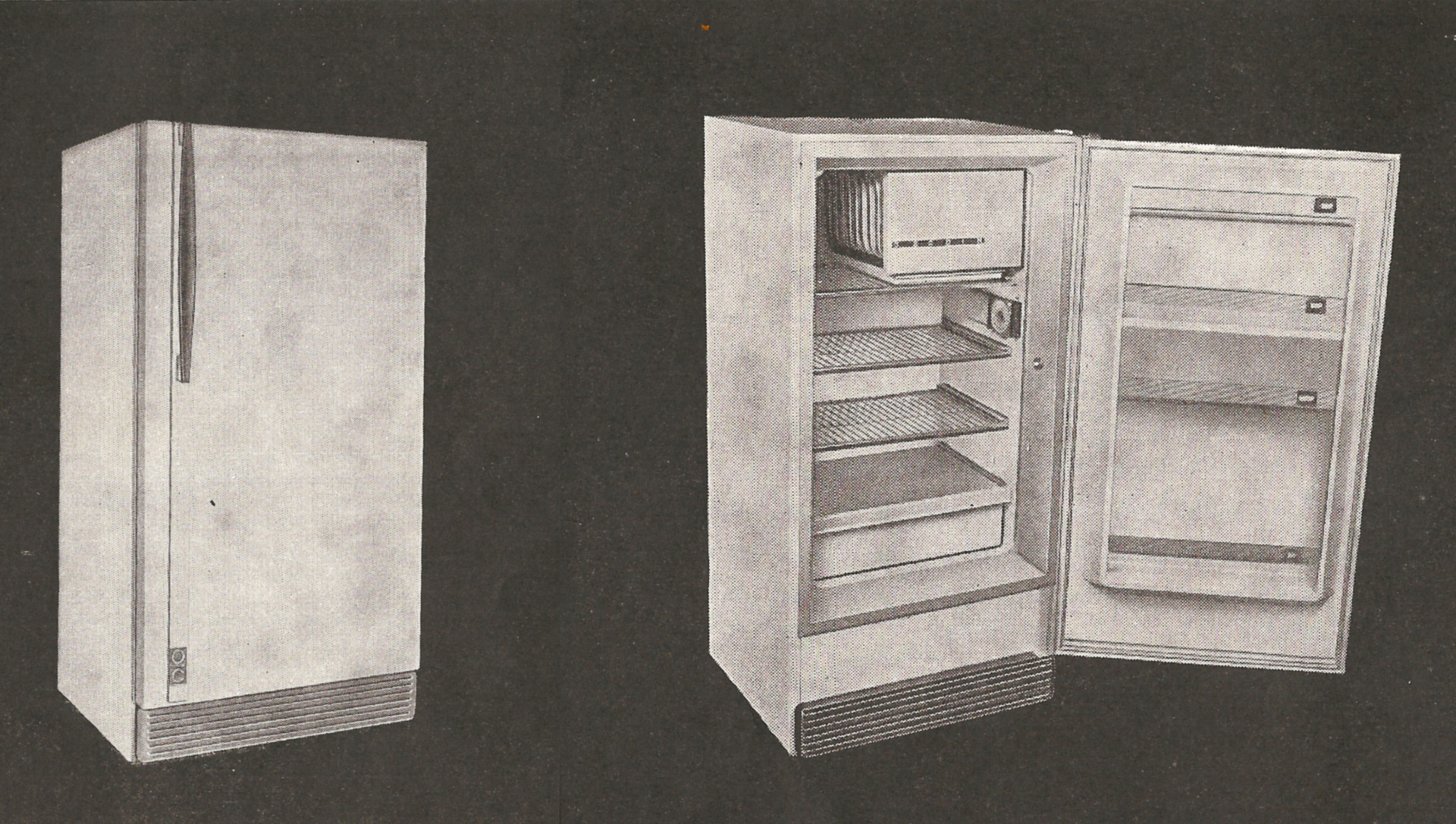 A refrigerator (colloquially fridge, or fridgefreezer in the UK) is a popular household appliance that consists of a thermally insulatedcompartment and a heat pump (mechanical, electronic or chemical) that transfers heat from the inside of the fridge to its external environment so that the inside of the fridge is cooled to a temperature below the ambient temperature of the room. Refrigeration is an essential food storage technique in developed countries. The lower temperature lowers the reproduction rate of bacteria, so the refrigerator reduces the rate of spoilage. A refrigerator maintains a temperature a few degrees above the freezing point of water. Optimum temperature range for perishable food storage is 3 to 5 °C (37 to 41 °F). A similar device that maintains a temperature below the freezing point of water is called a freezer. The refrigerator replaced the icebox, which had been a common household appliance for almost a century and a half. For this reason, a refrigerator is sometimes referred to as an icebox in American usage.
The first cooling systems for food involved using ice. Artificial refrigeration began in the mid-1750s, and developed in the early 1800s. In 1834, the first working vapor-compression refrigeration system was built. The first commercial ice-making machine was invented in 1854. In 1913, refrigerators for home use were invented. In 1923 Frigidaire introduced the first self-contained unit. The introduction of Freon in the 1920s expanded the refrigerator market during the 1930s. Home freezers as separate compartments (larger than necessary just for ice cubes) were introduced in 1940. Frozen foods, previously a luxury item, became commonplace.
Freezer units are used in households and in industry and commerce. Commercial refrigerator and freezer units were in use for almost 40 years prior to the common home models. The freezer-on-top-and-refrigerator-on-bottom style has been the basic style since the 1940s, until modern refrigerators broke the trend. A vapor compression cycle is used in most household refrigerators, refrigerator–freezers and freezers. Newer refrigerators may include automatic defrosting, chilled water, and ice from a dispenser in the door.
Domestic refrigerators and freezers for food storage are made in a range of sizes. Among the smallest is a 4 L Peltier refrigerator advertised as being able to hold 6 cans of beer. A large domestic refrigerator stands as tall as a person and may be about 1 m wide with a capacity of 600 L. Refrigerators and freezers may be free-standing, or built into a kitchen. The refrigerator allows the modern household to keep food fresh for longer than before. Freezers allow people to buy food in bulk and eat it at leisure, and bulk purchases save money.

O (named o /oʊ/, plural oes) is the 15th letter and the fourth vowel in the modern English alphabetand the ISO basic Latin alphabet. It is used in words such as opulent and orangutan, as well as names such as Ophelia and Oscar.
Its graphic form has remained fairly constant from Phoenician times until today. The name of the Phoenician letter was ʿeyn, meaning "eye", and indeed its shape originates simply as a drawing of a human eye (possibly inspired by the corresponding Egyptian hieroglyph, cf. Proto-Sinaitic script). Its original sound value was that of a consonant, probably [ʕ], the sound represented by the cognate Arabic letter ع ʿayn.
The use of this Phoenician letter for a vowel sound is due to the early Greek alphabets, which adopted the letter as O "omicron"to represent the vowel /o/. The letter was adopted with this value in the Old Italic alphabets, including the early Latin alphabet. In Greek, a variation of the form later came to distinguish this long sound (Omega, meaning "large O") from the short o (Omicron, meaning "small o"). Greek omicron gave rise to the corresponding Cyrillic letter O and the early Italic letter to runic ᛟ.
Even alphabets that are not derived from Semitic tend to have similar forms to represent this sound; for example, the creators of the Afaka and Ol Chiki scripts, each invented in different parts of the world in the last century, both attributed their vowels for 'O' to the shape of the mouth when making this sound.

The hyphen-minus (-) is a character used in digital documents and computing to represent a hyphen (‐) or a minus sign (−).
It is present in Unicode as code point U+002D - HYPHEN-MINUS; it is also in ASCII with the same value.

C is the third letter in the English alphabet and a letter of the alphabets of many other writing systemswhich inherited it from the Latin alphabet. It is also the third letter of the ISO basic Latin alphabet. It is named cee (pronounced /siː/) in English.
"C" comes from the same letter as "G". The Semites named it gimel. The sign is possibly adapted from an Egyptian hieroglyphfor a staff sling, which may have been the meaning of the name gimel. Another possibility is that it depicted a camel, the Semitic name for which was gamal. Barry B. Powell, a specialist in the history of writing, states "It is hard to imagine how gimel = "camel" can be derived from the picture of a camel (it may show his hump, or his head and neck!)".[2]
In the Etruscan language, plosive consonants had no contrastive voicing, so the Greek 'Γ' (Gamma) was adopted into the Etruscan alphabet to represent /k/. Already in the Western Greek alphabet, Gamma first took a ' ' form in Early Etruscan, then ' ' in Classical Etruscan. In Latin it eventually took the 'c' form in Classical Latin. In the earliest Latin inscriptions, the letters 'c k q' were used to represent the sounds /k/ and /ɡ/ (which were not differentiated in writing). Of these, 'q' was used to represent /k/or /ɡ/ before a rounded vowel, 'k' before 'a', and 'c' elsewhere.[3] During the 3rd century BC, a modified character was introduced for /ɡ/, and 'c' itself was retained for /k/. The use of 'c' (and its variant 'g') replaced most usages of 'k' and 'q'. Hence, in the classical period and after, 'g' was treated as the equivalent of Greek gamma, and 'c' as the equivalent of kappa; this shows in the romanization of Greek words, as in 'ΚΑΔΜΟΣ', 'ΚΥΡΟΣ', and 'ΦΩΚΙΣ' came into Latin as 'cadmvs', 'cyrvs' and 'phocis', respectively.
Other alphabets have letters homoglyphic to 'c' but not analogous in use and derivation, like the Cyrillic letter Es (С, с) which derives from the lunate sigma, named due to its resemblance to the crescent moon.