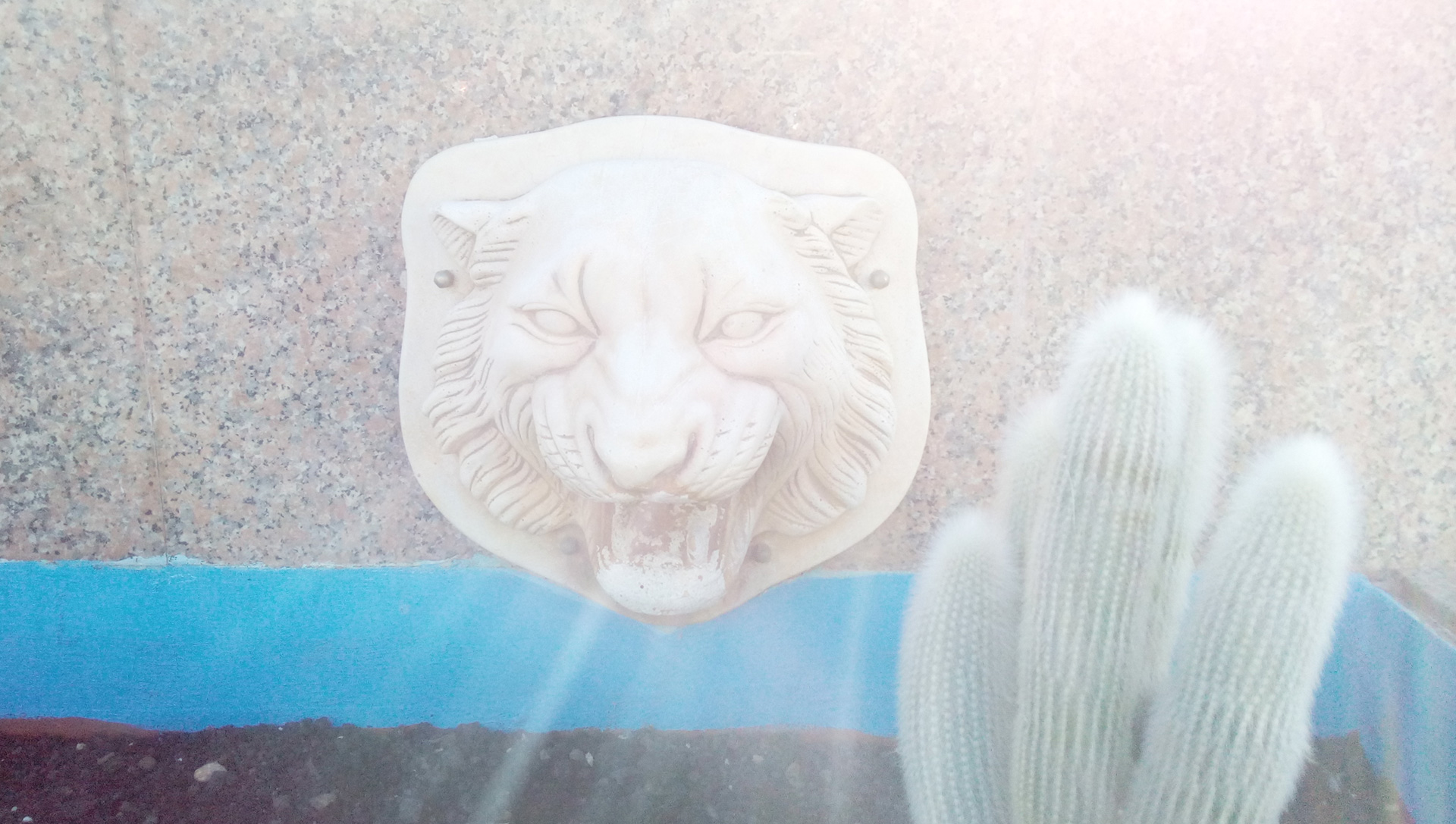 the Tiger and the Cactus

The tiger (Panthera tigris) is the largest cat species, most recognizable for its pattern of dark vertical stripes on reddish-orange fur with a lighter underside. The species is classified in the genus Panthera with the lion, leopard, jaguar, and snow leopard. It is an apex predator, primarily preying on ungulates such as deer and bovids. It is territorial and generally a solitary but social predator, often requiring large contiguous areas of habitat that support its prey requirements. This, coupled with the fact that it is indigenous to some of the more densely populated places on Earth, has caused significant conflicts with humans.
Tiger populations once ranged widely across Asia, from the Black Sea in the west, to the Indian Ocean in the south, and from Kolyma to Sumatra in the east. Over the past 100 years, the species has lost 93% of its historic range, and has been extirpated from Western and Central Asia, from the islands of Java and Bali, and from large areas of Southeast, South, and East Asia. Today, it ranges from the Siberian taiga to open grasslands and tropical mangrove swamps, and has been classified as endangered in the IUCN Red List. Major reasons for population decline include habitat destruction, habitat fragmentation and poaching. The extent of area inhabited by tigers is estimated at less than 1,184,911 km2 (457,497 sq mi), a 41% decline from the area estimated in the mid-1990s. The global wild population is estimated to number between 3,062 and 3,948 individuals, down from around 100,000 at the start of the 20th century, with most remaining populations occurring in small pockets isolated from each other, in which about 2,000 tigers live on the Indian subcontinent. In 2016, an estimate of a global wild tiger population of approximately 3,890 individuals was presented during the Third Asia Ministerial Conference on Tiger Conservation. The WWF declared that the world's count of wild tigers has risen for the first time in a century.
The tiger is among the most recognisable and popular of the world's charismatic megafauna. It featured prominently in ancient mythology and folklore, and continues to be depicted in modern films and literature, appearing on many flags, coats of arms, and as mascots for sporting teams. The tiger is the national animal of Bangladesh, India, Malaysia and South Korea.

A cactus (plural: cacti, cactuses, or cactus) is a member of the plant family Cactaceae, a family comprising about 127 genera with some 1750 known species of the order Caryophyllales. The word "cactus" derives, through Latin, from the Ancient Greek κάκτος, kaktos, a name originally used by Theophrastus for a spiny plant whose identity is not certain. Cacti occur in a wide range of shapes and sizes. Most cacti live in habitats subject to at least some drought. Many live in extremely dry environments, even being found in the Atacama Desert, one of the driest places on earth. Cacti show many adaptations to conserve water. Almost all cacti are succulents, meaning they have thickened, fleshy parts adapted to store water. Unlike many other succulents, the stem is the only part of most cacti where this vital process takes place. Most species of cacti have lost true leaves, retaining only spines, which are highly modified leaves. As well as defending against herbivores, spines help prevent water loss by reducing air flow close to the cactus and providing some shade. In the absence of leaves, enlarged stems carry out photosynthesis. Cacti are native to the Americas, ranging from Patagonia in the south to parts of western Canada in the north—except for Rhipsalis baccifera, which also grows in Africa and Sri Lanka.
Cactus spines are produced from specialized structures called areoles, a kind of highly reduced branch. Areoles are an identifying feature of cacti. As well as spines, areoles give rise to flowers, which are usually tubular and multipetaled. Many cacti have short growing seasons and long dormancies, and are able to react quickly to any rainfall, helped by an extensive but relatively shallow root system that quickly absorbs any water reaching the ground surface. Cactus stems are often ribbed or fluted, which allows them to expand and contract easily for quick water absorption after rain, followed by long drought periods. Like other succulent plants, most cacti employ a special mechanism called "crassulacean acid metabolism" (CAM) as part of photosynthesis. Transpiration, during which carbon dioxide enters the plant and water escapes, does not take place during the day at the same time as photosynthesis, but instead occurs at night. The plant stores the carbon dioxide it takes in as malic acid, retaining it until daylight returns, and only then using it in photosynthesis. Because transpiration takes place during the cooler, more humid night hours, water loss is significantly reduced.
Many smaller cacti have globe-shaped stems, combining the highest possible volume for water storage, with the lowest possible surface area for water loss from transpiration. The tallest[Note 2] free-standing cactus is Pachycereus pringlei, with a maximum recorded height of 19.2 m (63 ft), and the smallest is Blossfeldia liliputiana, only about 1 cm (0.4 in) in diameter at maturity. A fully grown saguaro (Carnegiea gigantea) is said to be able to absorb as much as 200 U.S. gallons (760 l; 170 imp gal) of water during a rainstorm. A few species differ significantly in appearance from most of the family. At least superficially, plants of the genus Pereskia resemble other trees and shrubs growing around them. They have persistent leaves, and when older, bark-covered stems. Their areoles identify them as cacti, and in spite of their appearance, they, too, have many adaptations for water conservation. Pereskia is considered close to the ancestral species from which all cacti evolved. In tropical regions, other cacti grow as forest climbers and epiphytes (plants that grow on trees). Their stems are typically flattened, almost leaf-like in appearance, with fewer or even no spines, such as the well-known Christmas cactus or Thanksgiving cactus (in the genus Schlumbergera).
Cacti have a variety of uses: many species are used as ornamental plants, others are grown for fodder or forage, and others for food (particularly their fruit). Cochineal is the product of an insect that lives on some cacti.
Many succulent plants in both the Old and New World – such as some Euphorbiaceae (euphorbias) – bear a striking resemblance to cacti, and may incorrectly be called "cactus" in common usage.